After success of PaMu X13 – a million-dollar Bluetooth headset on Indiegogo, this time Padmate continued to release an upgrade called Pamu Scroll that changed a lot in design as well as the original sound quality. In my opinion, this is not exactly a high-end wireless headset, but it is one of the best mid-range true wireless headphones sale at the price of “soft” and impressed by many outstanding features. So to know if it’s just a good advertisement or really worth buying, let’s find out now.

Basic parameters of the product

Unexpected transformation design from circular charging Dock to extremely delicate and beautiful cylindrical shape. If the first Pamu version is in a modern style and somewhat resembles a chalk box, Pamu Scroll is in an ancient style, infinite mystery. The overall exterior of the Pamu Scroll is a combination of art and class. Compared to Pamu 1.0, this new version is much more compact when cutting off the “hook” and gathering all the chips into one, unlike the old version divided into 3 sections rather “luxuriant”.

Use plastic material combined with suede for a new look and very attractive. The collapsible magnet is exquisitely designed like 3D diamond cuts and sparkles when exposed to light. The earpiece is thoughtless, but with the Pamu Scroll quite the opposite, with that unique design idea that makes us feel like we are exploring an ancient secret and this also impresses us. those around.

Pamu Scroll is available in four colors including Rock’n’roll, Graphene (in this article), Glory Edition, Sakura. In which, there are 3 colors for orientation for men and pink for women. On the surface of each case charging is made with shiny and metallic dust labels to create a sparkle when there is light, while limiting the water to penetrate the skin inside to avoid moisture from which there is a strange smell, note the part Charger case does not support water resistance.

Right side of the Charger case is where the microUSB charging port is designed like the speaker on the portable speaker products, combining high-end concentric vignettes (famous motifs on Asus laptops). It’s great that the PaMu Scroll adds wireless charging via a receiver accessory called PaMu Wireless, which is compatible with most wireless charging adapters today.

The left edge is still the same as the right structure but there is no connection port, only 4 blue battery capacity LEDs are hidden inside, each corresponding to 25% capacity. Each time the charger is plugged in, each lamp will blink until the number of 4 is sufficient. These lights are also one of the highlights because it’s like the energy sources in Marvel’s superhero movies (I’m Marvel fan).

Pamu Scroll uses the Bluetooth 5.0 standard for the highest possible audio input quality, while the connection process is stable and farther. However, the headset only supports connecting a single device, if you want to connect another device, you must disconnect the previous device. On the surface of the headset (Faceplate) is divided into 2 areas, the smooth area is the recording area of ​​the microphone and the smooth area is where we use the touch feature to stop / play, receive calls (1 click ), transfer items (2 clicks). Through the process of using it, I found the right headset is extremely important because only the right ear can connect to the device. If we only remove the left ear from the Charging Case, it will not work and vice versa. The left ear only has the function of stopping / playing, receiving a call, and calling a virtual assistant but cannot transfer the post as it is on the right. At the same time, if you just want to listen to one ear, it will of course be the right ear. So, if anyone ends up getting lost on the right earpiece then determine.

One of the worthwhile points on Pamu Scroll is its water resistance (IPX6 standard). This feature has been focused on by Padmate company to enhance the product value, to enable users to play sports or suddenly have a “rain across” or listen to music in the bathroom (according to the label – Video from the company). . In theory, the IPX6 waterproof standard can only resist strong water jets for at least 3 minutes, so the user should consider carefully the use of the bathroom.

Right now, I decided that this is not a headset for enjoying high-class music, so I will make the most popular music method today on Zing Mp3. Through 10 multi-genre tracks I obtained the following results: Treble range works best when showing details of medium to high timbre but if the volume is up to 85% (cannot adjust the volume with headphones, which must be adjusted on the connected device) high tones start to lighten and cause discomfort to the ear, I am a high-pitched “addict” so after a little “big play” it is a little light. The mid range is not average, but it is not very well invested. The songs are fast, there are many voices and the instruments will be a bit confusing. Because I have not had a chance to use Pamu v1 version, so I cannot compare how the bass range changes, but the own evaluation on Pamu Scroll, Bass is acceptable. The bass intensity is quite good, although the audio frequency is not deep. In addition, the headset will not have the application included to tune sound like other brands.

One point to note, during the use I found with the Samsung Galaxy A7-2015 (Bluetooth 4.0) the auto-connect feature of the headset seems to be a bit slow. At the same time when running the car, the signal sometimes gets lagged, though not much and the distance from this room to the opposite room (both rooms are closed) is prone to lag. However, testing on Samsung Galaxy Note 8 (Bluetooth 5.0, aptX) connected very quickly and no more lag phenomenon. The manufacturer’s declared distance of 10m is most likely a straight line without obstacles (room door, floor to floor). In addition, Pamu Scroll can make calls with 2 ears instead of one ear as the first version.

According to the publisher Pamu Scroll for 3.5 hours of battery life when listening to music and about 5 hours, the standby time of the headset will be 100 hours continuously. In addition, the charging case will allow the headset to fully charge 3 times, ie we will have 10.5 hours of operation at the most, and it will take you about 2 hours to fully charge the inner case and headset. An acceptable battery level for a true wireless headset costs under under million. 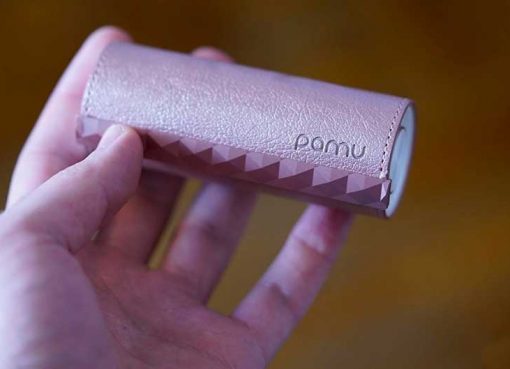 PaMu Scroll: The TWS Earphones That Want to Challenge the Airpods 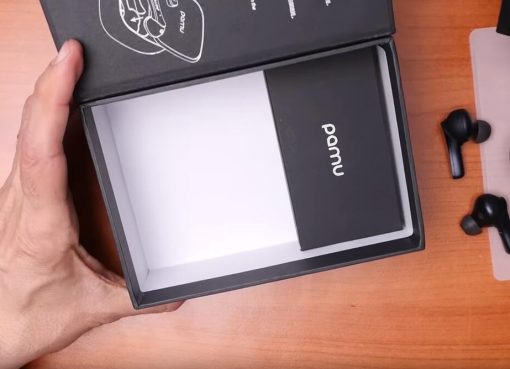 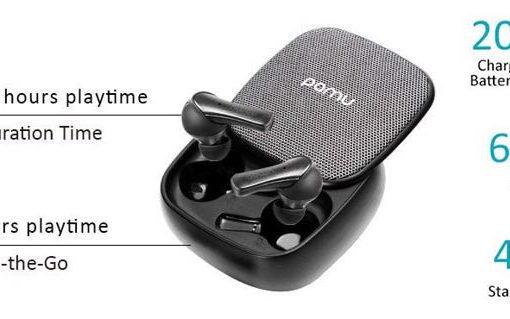